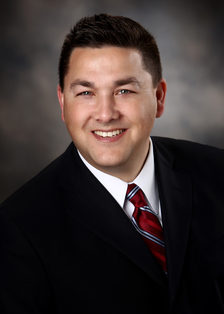 Chad Hendricks graduated from Marquette University Law School and joined the Law Offices of Randall E. Reinhardt as an associate attorney in February 2014. According to Chad, "I have always been drawn to personal injury work because it allows me to represent individuals who have endured the devastation of an accident or loss of a loved one due to someone else's mistake."

Since joining the firm, Chad has worked on a variety of negligence cases in all types of personal injury, product liability, and wrongful death matters. "It is an incredible opportunity for me to work alongside and learn from such a talented and devoted attorney like Randy (Reinhardt)."

Outside of the office, Chad remains focused on his professional growth and development as an active member of the Wisconsin Association for Justice, the Milwaukee Bar Association, and the State Bar of Wisconsin.

Chad brings with him a passion for fearlessly serving people in the community and his unique professional background will benefit anyone who works with him.

He spent three years in the Army as an infantryman during Operation Desert Storm. He was then hired as a City of Milwaukee firefighter and joined the Wisconsin Army National Guard as a UH-60 Blackhawk Helicopter pilot. Chad was forced to make a career change after he suffered a severe neck and back injury while working as a firefighter. He was hired in 2006 as an airline pilot flying 70-seat passenger jets first for Delta Airlines and then Midwest Airlines. However, when Midwest Airlines was purchased and dissolved, Chad decided to return and finish his education.

While a student at Marquette University Law School, Chad was selected as a "Top 40 National Finalist" for the Minority Corporate Council's Lloyd M. Johnson Scholarship. He was president of the Native American Law Students Association, a member of the Multicultural Law Students Association, and a member of Marquette's Sports Law Review. Additionally, in his final year of law school Chad worked as research assistant to Professor Jay Grenig for two semesters.

In addition to his classwork and extracurricular activities, Chad volunteered for the Sojourner Family Peace Center delivering food and gifts to the homes of victims of family violence. He also volunteered at Interfaith Older Adult Programs doing yard work, snow shoveling, and other handyman work for senior citizens in and around his neighborhood.

In 2009 Chad graduated from the University of Wisconsin-Parkside Magna Cum Laude with a B.S. in Sports Management. He was named UW-Parkside's Outstanding Graduate for 2009, which is the highest honor given to a graduating senior. He grew up in Milwaukee and graduated from Cudahy High School. He got his first taste of personal injury work in high school while working as an office aide at a prominent Milwaukee personal injury firm. Chad now lives in Greenfield with his wife, Anna, two sons, George and Henry, and three dogs. In his free time he enjoys golfing, running, racing go karts, and spending time with his family.